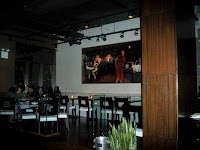 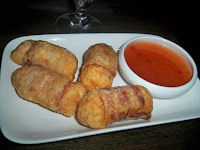 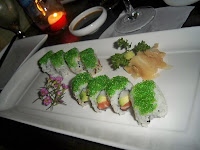 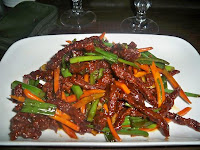 You might remember my cousin Vicky's helpful heads-up about SHI. I thought that her description was so enticing that I had to try it for myself--that same night. What can I say, I'm a woman on a mission. My dining companions and I loved it because you get great food and exceptional value.
Atmosphere:
Long Island City never ceases to amaze me! How an industrial, warehouse neighborhood transformed itself so quickly into a chic paradise is beyond me--but I must say, I'm into it.
SHI is located on one such trendy LIC road--right on Center Boulevard on the waterfront. The actual restaurant is found on the ground floor of a luxury high-rise apartment building. And although this could sometimes be a drawback--housing complex restaurants tend to be devoid of character--SHI doesn't fall into this trap. On the contrary, it has so much spark and individuality that it pleasantly surprised me.
The doors are heavy and made of dark, carved wood. They're mysterious and make you wonder what's in store beyond them. The interior is modern and not over-designed--the artwork is sparse and there's a cool-looking chandelier in the back of the dining room. SHI's best features are its floor to ceiling windows that showcase a gorgeous view of the Manhattan skyline.
Food:
We were for the most part impressed by SHI's cuisine. Although our dining companions, Lauren and Marty weren't completely satiated, they agreed that the food was of good quality. Here's what we tried:

Bacon Wrapped Shrimp - This was an appetizer that I split with Dan and it just immediately spoke to me. Aside from the seafood-bacon combo, which I love, the outside of it was fried. I know that this is complete gluttony but it was just so damn good. The tart vinegar sauce that was served on the side of it was also nice--very flavorful and refreshing.

Popcorn Beef - Immediately intrigued by its name, I was again drawn to it like with the bacon shrimp. I was expecting the beef to be small and perhaps round but when it came out, I just couldn't understand why they called it "popcorn." Regardless of my confusion, the beef tasted amazing. It was super crispy on the outside and so tangy from the sweet and sour sauce. The heartiness of this dish was diffused by fresh veggies such as carrots and peppers. I'd get this again without a doubt and Dan would too--he really enjoyed the couple of bites that I gave him.

General Tso's Chicken - Dan ordered this and was very satisfied with it. I tasted it too and recognized it to be a good version of its kind--a simple sweet and spicy fried chicken served with steamed broccoli. In Dan's own words "it was just a solid, well done General Tso's."

Sushi - Lauren and Martin both ordered sushi. While I didn't try it because there wasn't too much on their plates, they seemed to enjoy it--their only complaint was about the small portion. I'd suggest getting a small side if you decide to go with a sushi entree.

The Chocolate Molt - Since not everyone was completely full at the end of our meal, we decided to get dessert. The chocolate molt promised a gooey, flourless chocolate cake, which we were all psyched to try. Although what we received was delicious, it was by no means molten--there was no silky chocolate oozing from its middle, which was a little disappointing.

Service and Cost:
I sometimes find that because of a language barrier at Asian restaurants, the service isn't always what you want it to be. However, at SHI it is. Our waiter was friendly and not afraid to give suggestions. He made a couple of jokes and definitely relaxed us. The food came out on-time, which is always a plus--especially when dining late at night.

The prices are fair and comparable to other Asian restaurants in the neighborhood. Appetizers range between $2-8, entrees between $7.50-$19 and desserts are somewhere in the $5-$7 range.