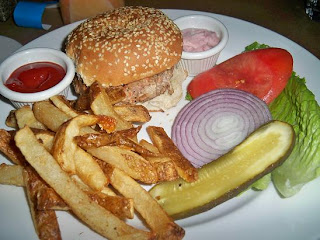 The first place that we hit after our big trip was Indigo. We were absolutely starving after our long flight--and with nothing in the fridge, we decided to elongate our honeymoon fried food gorgefest. We headed to Indigo to catch the remains of the Giants game and to have ourselves a good ol' fashioned American burger.
There were lots of burger, club and wrap choices but we decided to go for the semi-healthy, semi-gluttonous turkey burger with bacon. To say that it was the best turkey burger that I've had in a while would not be a lie. Here are the deets:
Turkey Burger (with a side of bacon) - This dish was a feast, complete with homemade fries with crunchy skins, thick slices of tomato and onion as well as cranberry mayonnaise on the side, giving it that Thanksgiving-ey touch.
The meat itself was wonderful--juicy and thick, this was no small burger. It was a generous portion that filled you up nicely and the lightly toasted sesame bun was also a plus. The bacon, perfectly crispy and chewy was pure indulgence--once you bit into it, the smoky crunch was just divine. It brought a smile to our tired, jet-lagged faces.
The cost of the burger was reasonable. It's normally priced at $8 but we payed $10 a piece because of the bacon.
We were so impressed by Indigo that we've already made plans to go again this Sunday with Josh and Diana for Football watching and maybe some yummy brunch. I've had their waffles before and they're damn gooood--I'm already looking forward to it.
Posted by Fooditka