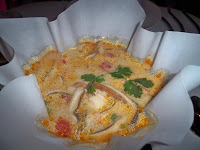 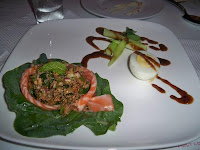 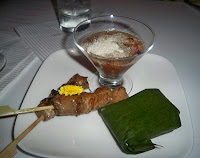 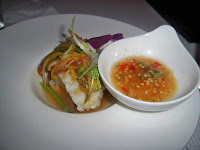 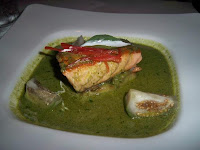 My cousin Vicky and I went to a re-opening press dinner on Tuesday at Village Thai restaurant, Kurve. While this wasn't the first time Kurve has opened, I think--and hope--that it'll be the last time. Andy Yang, the admirable chef and owner charmed the pants off of us and while we were disappointed by the inconsistent service, the food and Andy's smile got the best of us.

Atmosphere:
Upon stepping into Kurve, I was bombarded by its futuristic design. The predominant color is purple and as you could guess from its name, the restaurant walls display various asymmetrical, curvy shapes. The overall effect is a cross between new age and 80's retro.

You'll see a DJ booth on your way to the bathroom and the music is a fun mix of mostly upbeat dance electronica. There's a bar in the middle of the dining room and a couple of comfy white leather couches on right that just say "80's club scene." It's all very cool and sleek but I wouldn't call it comfy and cozy.

Food:
Because our food tasting was so extensive, I'm only going to highlight the stand-outs. Overall, the food was delicious, fresh and some dishes even made our taste buds dance. My only problem was the timing in which the food came out--it was too sporadic and unpredictable. Here are some of my favorites of the night:

Bamboo Heart Dumplings - This was part of our dim sum plate and though it was the most unfamiliar to us, it impressed us the most. The exterior was silky smooth and the interior had a healthy and almost smoky taste. I imagine that there was lemongrass in it because of its lovely citrusy zing.

Tom Yum Lobster - I absolutely love a good tom yum soup and this one was really special. It was served in an interesting dish with a flame base and the actual soup bowl was lined with wax paper. While I was warned that the broth would be spicy, it was a welcome spice that awakened my senses. The lobster and shrimp inside the soup were as fresh as can be but my ultimate favorite were the slivers of shiitake mushrooms. Vicky tried my soup too and though she's not a fan of spicy food, she really liked it.

Salmon Wrapped Larb Duck - We waited way too long for this dish but when it came out, we knew that it was unique. It looked picturesque with a rich brown duck mixture wrapped in a ribbon of fiery orange/pink raw salmon. The salmon was a nice--and much needed--neutralizer of the spicy duck. There was an egg with a soy-based sauce that calmed our taste buds--the egg white was especially soothing on our sore tongues.

Grilled Berkshire Pork - I'm going to go as far as to call this my favorite dish of the night--and it's all because of the meat. The pork was so tender and flavorful that I just couldn't believe each time I took a bite. There was a spicy sauce that accompanied it, but I loved the pork on its own without embellishments. The only thing I needed was plain white rice--a side that wouldn't steal the pork's thunder.

Poached Black Cod - Wow! When we found out that the cod was imported from Japan, we were sold. And once we had the pleasure of tasting it, we were in la la land. It was luxurious, clean and exuded quality. Floating in a lovely fish broth, it was enhanced by fresh plum and spring onion. It was a dish that I'd get for a late dinner because it didn't make you feel gluttonous and full. Vicky said that she'll definitely get it next time--and I think that I will too.

Service:
As I mentioned, the service wasn't top notch. While everyone was super nice and enthusiastic, they weren't organized. More than once were we asked if we'd ordered drinks or a certain course a few minutes after that order was placed. If only there was better communication, these redundancies could be avoided.

A positive aspect about the service was having contact with Andy Yang, Kurve's chef and owner. He was by far the most charming and pleasant man in the restaurant. His clear passion for his menu poured out of him with every detailed explanation of each dish. Vicky and I relished moments with him when he'd indulge us in mini-monologues about imported cod or low sodium dim sum--it was better than pillow talk!

Unfortunately, we got impatient with the slow pacing of the tasting--the dishes were so spread apart that we found ourselves at Kurve for more than four hours. At a certain point, we had to leave because it just got too late. Who could eat dessert at 1a? Not me, and not on a Tuesday night.

Vicky and I enjoyed ourselves but might wait out a second visit for when the service improves.