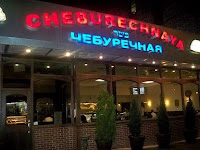 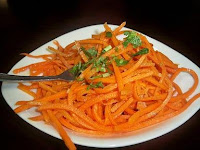 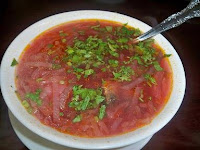 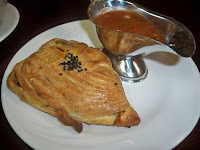 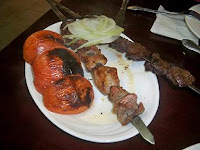 Cheburechnaya - 92-09 63rd Drive, Flushing NY 11374
718.897.9080
R/V/G Train to 63rd Drive
www.cheburechnaya.com
Meg had the great idea of checking out Central Queens last week and we headed to Rego Park to try a cuisine that we've both never had--Bukharian food. Doing her research, Meg found Cheburechnaya--a fairly large and casual Bukharian eatery, which is also friendly towards non-locals such as us. We ended up having such a great time that we promised ourselves to be back real soon and to bring others with us.
Atmosphere:
Cheburechnaya is a casual and relaxed type of place. You don't need reservations and you can definitely wear your most comfortable outfit. Upon walking in, we were greeted by a spacious room with simple tables and chairs and a visible grill up front where the kitchen staff prepares various delicacies. The vibe is social, as there are TVs set up and tuned to Russian stations as well as people chatting boisterously--some of them families with young children.
While you'll mostly find locals here--a lot of them Russian speakers--you won't feel ostracized or strange. The waitstaff is very welcoming and agreeable--they're happy to explain things about the menu and accommodate you in any way that they can.
Food:
We didn't know what to expect but were pleasantly surprised by the plethora of intriguing menu choices. What caught our eye immediately were the dough products--some of them deep fried and some of them baked. We feasted on a lot of different dishes and had the pleasure of sampling something from almost every part of the menu. Just have a look at our choices:
Morkovcha (Carrot Salad)
- Although this dish was very simple, it was made with such good ingredients and flavors that worked so well together that it stood out as one of the best. The carrots were julienned into long curvy pieces and topped with fresh parsley. The flavoring included vinegar and maybe some lemon. The overall effect was refreshing, making this a wonderful, clean starter. We'd both get this again the second time around.
Chebureki with Cabbage - This was one of the famous Bukharian dough products--deep fried stuffed dough that kind of looks like a large empanada. Ours was stuffed with sweet white cabbage and onions, served alongside a simple tomato sauce--not to be confused with Italian marinara sauce. Meg and I loved it because who are we kidding--you can't go wrong with something enveloped in a fried pastry crust. My only complaint was that it was too greasy.
Samcy with Pumpkin - Another dough product, this one wasn't deep fried and it immediately won both of our stomachs over. The dough was flaky, golden and sprinkled with black sesame seeds--just fabulous. The inside was packed with pureed pumpkin, which was the perfect consistency, not too runny but not too hard either. The prevailing taste was hearty but also much lighter on the stomach than the fried version mentioned above.
Borscht - It was an unseasonably cold and rainy day so we both decided to get soup. My choice was the borscht and I remember having this at my friend Inna's house as a child. Cheburechnaya's version was a lot lighter, substituting creamy broth for a clear one. I loved this and didn't feel guilty eating it. It was also packed with plenty of cabbage and braised beef. The meat was a little too fatty for my taste but it was still wonderful. The chopped fresh parsley was a lovely finish, which gave the soup a lemony touch--definitely a dish to remember!
Beef Pelmeni - Meg ordered this soup and was quite pleased with it. Like mine, it had a light, clear broth and pelmeni (or dumplings) which floated to the top. This reminded me of wonton soup except much better because you didn't get that heavy feeling after eating it. The broth was crisp and citrusy (from cilantro) and the pelmeni were silky smooth on the outside and savory on the inside from the meat. Yum!
Shish Kebab - We were eager to order from the grill and chose a beef, lamb and even a grilled tomato kebab. The beef was tasty but too chewy for both of us--not our favorite and I'd skip this next time. The lamb was very good though and reminded me of souvlaki meat served in Astoria. I thought that the tomato was too runny on the inside--again, not my favorite. I'd like to experiment with something different next time--maybe ground meat?
Fries Topped with Mushrooms and Onions - I'm not sure why we opted for the fries (boring), but interesting toppings such as fried mushrooms and onions caught our eye. The fries were pretty standard and I wouldn't call them outstanding, but the mushrooms and onions were yummy. I picked them off and enjoyed them thoroughly but that's not to say that I ignored the fries. I happily ate those too.
Service and Cost:
Our waitstaff was nice and friendly but kept changing--I think that we had two different waitresses, maybe more. It didn't seem to matter though because they were organized and got our order correct. Overall, they were efficient, polite and made us feel welcome in a place that was unfamiliar to us.
Cheburechnaya is a great place to visit when you're short on cash. For all of the food that I just described, Meg and I paid roughly $27 each. We were more than full after our meal and highly recommend getting a lot of small dishes to share. The most cost effective items on the menu are the dough products (roughly $2.50 each), the soup ($3-$3.50 each) and even the kebobs (most were under $5 each). The splurge was surprisingly the fries at a whopping $7.50. Go figure!
3 Mmmms
Posted by Fooditka