Bondi Road - Great Food from Down Under 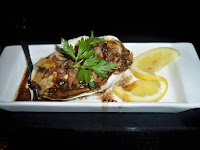 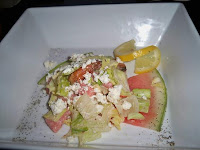 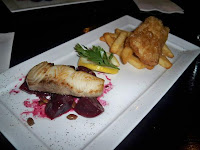 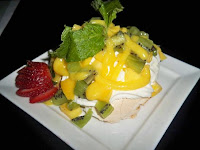 I was happy to accept an invitation to a private fall tasting at Lower East Side Aussie restaurant, Bondi Road. Relatively new to the nabe, Bondi is also sibling to an Aussie joint in Alphabet City called The Surnburnt Cow. My bro Peter and I spent an enjoyable evening at Bondi and we can't wait to go back for their $15 unlimited cocktail brunch.

Atmosphere:
Bondi Road is a small, casual restaurant on Rivington Street--right in the middle of hipster Mecca. Fitting in with its surroundings, it offers something new and unique to the trend-setting crowd that gathers there.

The restaurant is small-ish and narrow. There are a couple of tables outside but the majority are inside booths or you can sit at the bar. What I like about Bondi is its casual vibe. Upon walking in, Peter and I were greeted by a floor-to-ceiling mural of Bondi Beach. It was pretty cool to look at and definitely provided a conversation starter. Although, I consider Bondi to be a trendy place, I wouldn't dress up to come here. You'll see the staff sporting comfy jeans, t-shirts and piercings? Umm...yeah. Anything goes here--it's quintessential Lower East Side.

Food:
Both of us have never had Aussie cuisine, so we were pretty psyched. Our tasting menu consisted of 7 courses including dessert--indulgence at its max. My favorite dish was the kangaroo. Believe it or not, this breaded meaty sensation stole my heart. Here's more about our tasting:

Classic Oysters Kilpatrick - This was our starter course--it consisted of baked Blue Point oysters on the half-shell, dressed with plenty of bacon. You had to eat pretty much all of the bacon to get to the precious oyster. That wasn't a problem for me, as I adore bacon--and once I got that lovely smoky taste in my mouth, it made the oyster taste that much better.

BBQ Shrimp and Watermelon Salad - I've never seen this type of inventive combination before--shrimp, watermelon tossed with lettuce, feta cheese and a lemon mustard vinaigrette. The watermelon and feta combo was the best. What a lovely, refreshing contrast of sweet and salty! The shrimp were delicious too and provided a hearty touch from bbq flavoring. I'd love to get this again in its regular portion. What a treat!

Baby Scallop Rigatoni - Whenever I think of pasta, I envision something really heavy. Not this. It was super light because the rigatoni were cut in half and paired with asparagus, porcini mushrooms and baby scallops. I also liked the sauce, which had a seafood essence and the scallops themselves were sliced thin, making them much more manageable. Another interesting touch was the generous slice of muenster cheese on top--a lovely smooth finish, which made this Peter's favorite dish.

Shark with Roasted Beets and Barramundi with Chips - Getting to the core of this tasting, the shark and barramundi provided a glimpse into Bondi's Sunday and Monday specials. The shark was fabulous and again, very easy on the stomach. It was grilled lightly and rested on a bed of chunky red beats seasoned with lemon juice--very simple, natural flavors that worked well. I'd definitely come back for a Shark Attack Sunday offering.

The Barramundi, an Australian freshwater fish was beer battered and accompanied by thick-cut fries or chips. I liked the breading a lot but didn't care for the fish itself. It had a funky aftertaste that just lingered on your tongue, making you reach for a glass of water or beer. Although it looked great, I probably wouldn't get it next time.

King George Whiting and Tasmanian Ocean Trout - I'm a big fan of whiting--having tasted it a couple of times in Astoria. Bondi's version was grilled lightly and paired with garlic mushrooms and sweet pea puree. Absolutely loving sweet mushy peas, I was crazy about the ones here as well. I kept dipping the fish into them, which again made for a wonderfully sweet/salty combination.

The trout provided an earthy taste, as it was served with ratatouille and roasted tomato sauce. While I enjoyed it, I preferred the whiting. Peter on the other hand liked the trout better, appreciating its substantial texture and acidy taste from the veggies.

Breaded Roo Fillet - People might frown upon eating kangaroo because it's such a foreign concept but I strongly suggest it. To put it in familiar terms, it tastes like a delightful combination of chicken and beef. It was breaded in a crunchy crust--maybe topped with panko. And since the meat was so hearty, it was accompanied with arugula salad, embellished with sweet cherry dressing. The salad was sprinkled with a handful of dried cherries--just fantastic when combined with a forkfull of the roo. This was hands-down my favorite dish of the night.

Beer - What better way to wash down all that fish than with authentic Australian brew. Peter and I both ordered Coopers Original Pale Ale--a semi-bitter beer that reminded me of a cross between Stella Artois and Red Stripe. Definitely a good option that I'll order again in the future.

Kiwi-Mango Pavlova - A typical Australian dessert, the Bondi Pavlova provided a yummy ending to a delicious night. The kiwi and mango were sliced thin and and topped the crunchy meringue shell. The inside was soft and silky--a luxurious nucleus to this mound of goodness. Although I do love me some chocolate, I didn't miss it one bit in this fresh, indulgent dessert.

Service:
We were at a tasting so the service was pretty superb--no surprise there. Our waitresses were friendly, engaged us in conversation and solicited feedback about the food. It was also nice to hear their endearing Aussie accents--hard to understand at times but pleasant to the ear.
We had the honor of meeting the chef too, who was as funky and as interesting as our evening at Bondi Road--he represented the restaurant well and you could see why things are done the way that they are.

I strongly suggest that you pay a visit to Bondi Road, especially on the weekends for brunch or their $10 shark steaks or $10 pitchers of beach juice.