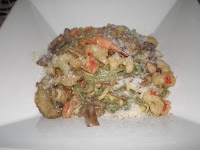 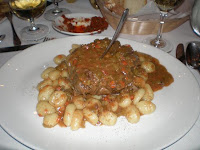 Dan and I went to Trattoria L'Incontro on Friday night with my aunt Ida, uncle Victor and my cousin Vicky. When my aunt told me that she wanted to go to a great Italian restaurant in Astoria, I immediately wanted to show off our beloved Trattoria. No one was disappointed and the evening ended with five very satiated individuals.

If you've been to Trattoria, you'll know that most of the menu isn't found on paper. Instead it's recited verbally through a ten minute speech by your waiter. While most of the dishes we ordered weren't new to me, below are the two great ones that I tried for the first time--and loved.
Spaghetti with Shrimp and Porcini Mushrooms: This is was one of Trattoria's pasta specials of the night. It was absolutely humongous, served in an oversized, deep bowl that was filled halfway. The best thing about it were the porcini mushrooms--they added heartiness and the most amazing aroma to the pasta sauce. Even if the mushrooms wouldn't be visible (which they were), you would've tasted them in this luxuriously smelling and tasting sauce. The shrimp was also wonderful--crunchy not at all chewy. This dish was perfect in my book and when I let my dining companions try it, they were molto impressed. My aunt commented on the mushrooms and said that "they do these really well here."
Osso Buco with Gnocchi: Another special, this one was for the men, as both Victor and Dan ordered it. I've had a gnocchi dish here before, but instead of Osso Buco it included short ribs. I was determined to try this one as well and Dan gave me a generous piece of his. I loved it, especially because it was incredibly tender and embellished with veggies such as diced carrots and onions. The gnocchi soaked up the amazing meat sauce and was a nice complement to this hearty plate. I wouldn't recommend getting this dish if you're not particularly hungry--it's huge and extremely filling.
I stand by my love for Trattoria and even though it's on the expensive side, it's worth the occasional treat--this one was courtesy of my aunt and uncle. Thanks Ida and Victor!
Posted by Fooditka