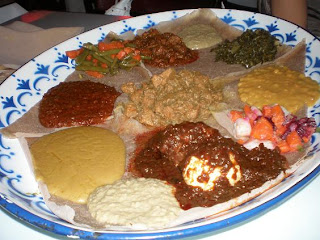 Ghenet - 284 Mulberry Street, New York, NY 10012
212.343.1888
V/F Train to Broadway/Lafayette or 6 to Bleecker Street
www.ghenet.com
There's been a lot of buzz around Ethiopian food. At first, my friend Michelle mentioned it a couple of months ago and since then, I've been hearing more and more. So when my friend Maya suggested trying Ghenet in Soho, I was excited and looked forward to a new experience.
Atmosphere:
Ghenet is a very simple, no frills place. For starters, the exterior is very unassuming and if you're not paying attention, it's easy to miss (look for the restaurant name on the window). The decor is basic with deep red walls and simple wooden tables. There is some sparse African folk art and tribal dolls that are also part of the decor but overall, it's pretty subtle. One of my favorite things about the atmosphere was the relaxing tribal music playing in the background. It removed me from my surroundings in Manhattan completely, which was so needed after a hard day.
The only negative about Ghenet is that it's not air conditioned. They had several fans going, which helped but on hot days like yesterday and today, you might want to keep that in mind or reconsider coming back when it's cooler.
Food:
As soon as I told people I was going out for Ethiopian food, the first thing they asked me was "are you going to eat with your fingers?" I did and it was awesome! Here's a little bit about the large dish that Maya, Alexis and I shared.
Ghenet Combination Plate: This was served on a beautiful folk platter, which was humongous and contained three types of meat and six types of veggies. The food rested on a bed of Injera or pancake bread. The Injera was also served on the side for us to break off and use as a scooper, instead of a fork and spoon. It was a lot of fun to eat this way and before anyone gets grossed out, I want to let you know that we each received fresh towels to clean our hands with before eating. They were really cold too which felt so nice on a hot day like yesterday.
The three meats that came with our dish were chicken, beef and lamb. The lamb was my favorite because it was cooked in a dark rich chocolate sauce, which reminded me of Mexican mole. The seasoning was different than that of mole but the color and texture were the same. All meats were braised and therefore were easy to scoop up with Injera. The chicken had an egg that was buried in the sauce--interesting touch but I wasn't in the mood for it. It was a cool association though--eggs, chicken. Hmmm...
The sides were also interesting and we ordered lentils, split peas, spicy beans, cabbage, string beans and a potato, carrot and beet salad. A lot of these reminded me of curry dishes, especially the lentils and split peas. My favorite sides included the spicy beans, which weren't all that spicy and the cabbage. The latter was soft but not overcooked and flavored mildly--it was a nice complement to the Injera. After a while, I got a little sick of the Injera because it was sour and I ended up eating everything (the meat and the veggies) with my fingers. I recommend doing this--it's fun and the food tastes better on its own.
Service and Cost:
The service is pretty blaze--they don't pay too much attention to you but I can't say that they weren't nice. We got everything that we needed but it would've been good to get more recommendations from our waiter, given that we were brand new to Ethiopian cuisine.
The cost was really reasonable, especially for our combo plate, which was only $45.95. Split three ways and rounding up for tax and tip, it set us back exactly $20 each. But if you're looking to order individual plates, they'll cost you in the neighborhood of $12.95-$17.95--also inexpensive.
3 Mmmms
Posted by Fooditka