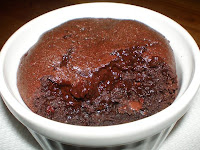 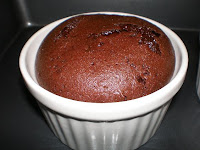 I was in the mood for something rich and chocolatey on Friday night so I decided to make chocolate souffle. As usual, I wanted to put a unique spin on it and created a semi-sweet chocolate lime souffle, inspired by a recipe from Bon Appetit.

It's true that souffles get a bad rap for being fussy--and they are. But if you work carefully and intelligently, you're bound to make them right. I screwed mine up a bit--I whisked in the egg whites instead of folding them in. This deflated them a bit but it was OK, the end result was still more than pleasing. Dan was pretty happy too and the two of us devoured this chocolate decadence like there was no tomorrow.
You can find the recipe here. In my variation, I omitted the cream topping to keep the calories down. I also substituted butterscotch chips for chocolate chips, which gave it that extra silkiness and caramely flavor. Instead of using a 1/2 cup of chips, I also decreased it to a modest handful--again to control the calories.
Best enjoyed after a long day, a good dinner, and ... (use your imagination)!
Posted by Fooditka