Bella Via - A Cozy Pasta Heaven 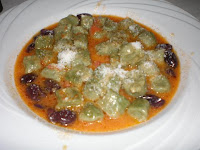 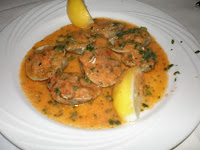 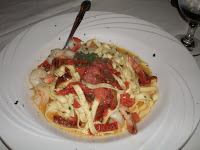 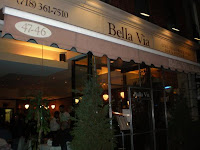 Bella Via was recommended to me by Vivian, owner of the Little Soap Shop and by my cousin Vicky. It's hard to find quality Italian and this place seemed cozy, nice and reasonably priced. Dan and I had dinner there this past Friday and were very happy with the food. The service still has a ways to go, but overall it was a good experience.

Bella Via has a very homey, comfortable feel. It's a warm place to be, both in the literal and figurative sense--the brick oven provides the physical warmth while friends and family give-off a happy, social vibe. The place was bumpin' on Friday night, and especially for a late dinner--we left around 10p and Bella showed no signs of slowing down. Everyone seemed to be enjoying themselves just like at a big Italian family dinner. Even though Bella is loud and boisterous, there were plenty of couples enjoying quality time, making this great for intimate evenings as well as for big social dinners.

Food:
The food is the area with which we were wowed. Everything was fresh, not heavy and seasoned really well. We got to sample a little bit of seafood as well as their starchy dishes:

Baked Clams Oreganato: We pretty much knew what to expect here--large clams, bread crumbs, butter, lemon, the works. But what we got was all that and so much more! The clams themselves were on the smaller side but so incredibly fresh that we were excited to have four pieces each. The sauce, which they floated on was the best part. While it had tomato in it, it was white wine based and so light that after the clams were gone, we dipped all of our bread into it and basically licked the plate clean.

Gnocchetti di Ricotta e Spinaci: This was my choice for entree and despite its name, "gnocchetti" or small gnocchi they definitely were not small. These were handmade spinach gnocchi that not only tasted delicious on their own, when dipped into the amazing white wine sauce described above, they were pure heaven. The only thing I had qualms with were the Kalamata olives in this dish. They were too salty and did not enhance the gnocchetti at all--they slightly took away from them. Dan tried my dish too and agreed--unbelievable gnocchi, the olives on the other hand were meh.

Tagliatelle with Shrimp and Sun-Dried Tomatoes: What caught Dan's attention about this dish was the shrimp. It was cooked perfectly, which is hard to find in restaurants. The pasta itself was also tasty and cooked al-dente. Once mixed (again) with the delicious white wine sauce, the pasta, the sun-dried tomatoes and the yummy shrimp, it made for a solid dish. Dan enjoyed it but mentioned many times that he liked my gnocchetti better.

Even though we weren't in the mood for this, I must mention that Bella Via also serves a variety of coal fired brick oven pizzas. From Pizza Margherita to Arugula with Prosciutto di Parma to Robiola Cheese with Truffle Oil, this seemed to be a popular dish to order.

Service and Cost:
The service was where I saw need for improvement. First off, our menus weren't given to us immediately, which was a bit strange. We sat there waiting for them and when they finally arrived and we looked through them, it took long for the waitress to come back and take our order.

Another bizarre occurrence was the absence of a bread basket. We were beginning to think that they don't serve them here but then I spied one at a table across from us. Where was ours? It came about 15-20 minutes after we ordered. While the dishes took a while to get to us, they were so delicious that we didn't let the service bother us.

Email ThisBlogThis!Share to TwitterShare to FacebookShare to Pinterest
Labels: Bella Via, Italian, LIC