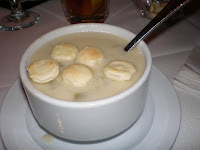 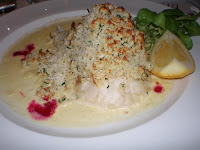 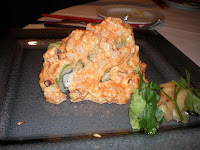 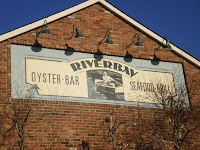 Riverbay Seafood Bar & Grill - 700 Willis Avenue, Williston Park, NY 11596
516.742.9191
www.riverbayrestaurant.com
We tried this place for the first time, celebrating a double dose of birthdays--Dan's 29th and his dad David's 60th. Although Riverbay happens to be on Long Island, it's in Williston Park, which is only about a 25-30 minute drive from Astoria--so don't be shy to venture out there. The owner also runs Major's Steakhouse in East Meadow, Long Island as well as the legendary The Boathouse Restaurant in Central Park.
Atmosphere:
This large, no frills brick building looks like a rustic house on the bay--hence its name. And even before you go in, you start to develop a mental picture of what awaits inside. As the exterior implies, the interior is also simple, yet elegant--decorated with rich wood moldings, fish sculptures and plenty of old photographs depicting life at sea.
The dining room itself is separated into three sections--all are very open and designed to hold a mix of tables both large and small. The great thing about Riverbay is that it accommodates large groups very well--as a party of six, we scored a round table in the far back corner which was both relatively quiet and private.
Food:
Wow! Simply put, the food blew me away and everything I tried was fantastic. Just have a look at a sampling of tonight's dinner:
New England Clam Chowder: Creamy but not too thick, this soup was the perfect starter. It was mixed with fresh ingredients like celery, potatoes and onions which intensified its deliciousness even more. And once I put those beautiful puffy oyster crackers in, I was in creamy soup heaven.
Grouper Gratinee - This happened to be tonight's special and what drew me to it was the topping of crispy breadcrumbs and lump crabmeat. The breadcrumbs formed an airy peak on the grouper and I ate them immediately, enjoying their crunchy, buttery taste. The fish itself-- despite being served in cream sauce--was really light and flaky. And although the portion was more than generous, I finished it to the last bite simply because it was so superb.
Aside from Riverbay's traditional fish dishes, they've also infused their menu with modern sushi alternatives. Here's what Diana and Vicki tried--and loved!
Volcano Roll: I'm nicknaming this the "big kahuna" roll because of its overwhelming height and its myriad ingredients, including king crab and cucumber wrapped in avocado and topped with scallops, octopus, king crab, masago and mayo. I had the chance to taste this dish and the mayo was my favorite ingredient--it not only seasoned everything nicely but also bound it together, creating a super creamy mound.
Spider Roll: Also a lovely plate, this one combined deep fried soft shell crab, lettuce, cucumber and masago. I didn't try this but it looked a lot lighter than than the Volcano roll and the portion was also substantial. Diana enjoyed it very much but she said that the Volcano Roll was slightly better.
Service and Cost:
Our waiter was very competent and brought an element of humor to the table--he had fun with our group, playing off the already sarcastic vibe we created. Good dinner recommendations were made and our waiter made sure we were all happy with our choices. I like that the waitstaff here looked the part--dressed in white overcoats and dark ties. They looked very official and portrayed their roles as seafood experts perfectly.
In terms of cost, this place is definitely a splurge. A three course dinner with an appetizer, entree, dessert and a drink will cost you about $60-$65 per person. Appetizers run from $4-$15 and the seafood entrees average somewhere in the mid $20's.