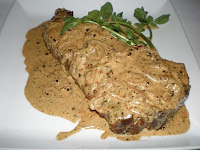 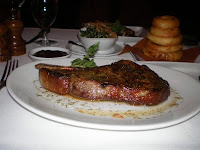 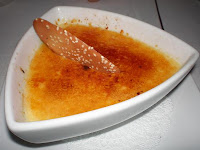 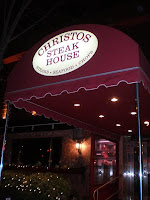 Christos Steakhouse - 41-08 23rd Avenue, Astoria, NY 11105
718.777.8400
N/W Train to Ditmars Blvd (last stop)
www.christossteakhouse.com
Dan and I came here to celebrate his 29th birthday last week--and man, were we impressed! Although somewhat hidden in our 'hood, this old school steakhouse really shines in all areas--the food, the service and the atmosphere are all fantastic. I highly recommend it to anyone for a special occasion or just an all around great meal. Watch out Peter Luger, Christos is a serious competitor!
Atmosphere:
Christos is the epitome of a good, traditional steakhouse. The decor is simple yet classic with a lot of wood embellishments and simple wooden tables and chairs. The coolest part about the front of the house is the huge lobster tank, which separates the lounge area from the formal dining room. Sitting right next to this thing, we saw lobsters being fished out and brought straight into the kitchen for preparation--this way you knew you were getting fresh seafood.
Another interesting thing about Christos is that they have a butcher shop, offering raw cuts of meat for sale. How cool is that? The beautiful red meat greets you as you walk in--you see it in the front window with the prices and all. While some would find this a bit too raw and real, I loved it--the gorgeous meat communicating a sort of authenticity and confidence to the customer.
Food:
The food here really surpassed our expectations. And in addition to traditional steakhouse dishes, they also offer several Greek specialties such as assorted Greek spreads, Saganaki--a pan fried Greek cheese, Loukaniko--Greek sausage; and so much more. Dan and I stuck to the basics and here's a taste of our celebration dinner:
Christos Baked Clams: A combination of clams oreganato and clams casino, this starter blew us away. We couldn't decide which we liked better because both were superb-ly hearty and fresh--and had a great salty but not fishy taste. The clams casino were topped with crispy bacon which was definitely the piece-de-resistance, while the clams oreganato had a refreshing citrusy essence with a loud crunch from the breadcrumbs. Far out!
The Steak:
Dan went for the big boy--the 24 oz Ribeye--and I got the 18 oz. Steak au Poivre with Metaxa Brandy sauce. Once again, we scored with these, and demolished them vigorously. Dan got his steak medium rare and boasted about its soft texture and juicy interior. And although it was a 24 ouncer, he was able to finish it because of the bone that ran down the middle.
My steak was also something special. The cut of meat was a Ribeye, infused with extra deliciousness that came from the sauce. The concoction included peppercorns, shallots, Metaxa and the luxuriousness of cream, which brought it all together. And again, while the portion was large, I finished it with grace--and with the help from an outside bone.
The Sides:
We ordered creamed spinach and fried onion rings for our side dishes. The creamed spinach was nice and silky while still earthy. It came topped with crispy shoestring onions, which we both couldn't get enough of.
The onion rings were beer battered and presented beautifully in a size order stack. While they tasted fine, this was the only dish we weren't impressed with. The batter was a bit bland and didn't do much to enhance the steak. We much rather prefer the bodacious onion rings they serve at Ruth's Chris.
Dessert:
Dessert was da bomb and included a silky creme brulee with dark chocolate, lining the bottom of the bowl. We both thought this was the most exceptional creme brulee we've ever had--no exaggeration. The custard was decadent, creamy and tasted of fresh vanilla. And the chocolate on the bottom was a fun surprise that we both looked forward to and devoured ridiculously quickly.

Service and Cost:
The service was impeccable. All of the waiters looked and sounded serious about their work and we held them in the highest regard for expertise. Every time we asked something, it seemed like they anticipated it beforehand and had an answer or a recommendation lined up. Our waiter was polite, proper and knowledgeable about the different cuts of meat offered. He made a great recommendation for our steaks, getting us genuinely excited for our meal.
Christos is definitely a splurge. For a three course dinner, including an appetizer, main course, dessert and a drink, I paid $65 per person. Appetizers go for $10-$20, steaks range from $28-$96 and desserts are mainly in the $8 range.