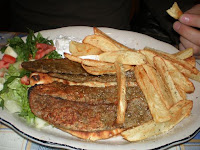 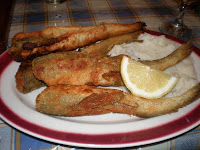 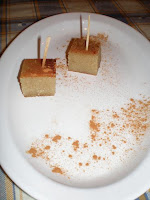 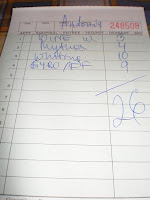 Corner 26 Taverna - 26-02 23rd Avenue, Astoria, NY 11105
718.777.5511
N/W Train to Ditmars Blvd (last stop)
Living only a block and an avenue from this local Taverna, I've been meaning to try it for some time. I finally had the chance to go last week and was quite happy with my visit. Hands down, the most authentic Greek food--and atmosphere--I've experienced to date. But don't expect anything fancy, Taverna is a simple place with an intense family feel.
Atmosphere:
Like I said, this place is modest and traditional--no frills. The space is small, seating up to twenty indoors and about fifteen outdoors in the warm weather. The tables are a bit cramped and we unfortunately got stuck near the door--enduring its constant opening and closing, feeling the chill of the night.
The walls have two gargantuan paintings of the Mediterranean Sea and of the Greek villages that surround it--kind of overpowering but at the same time powerful. The patrons that visit Taverna are definitely regulars. They know what's on the menu and they mostly speak Greek. Yes, we did feel a little out of place here, but my philosophy is "When in Astoria..." The background music was a favorite ambiance builder for me. It was all traditional Greek--uplifting, boisterous and folky.
Food:
The menu isn't extensive and contains Greek classics--lamb, fish, various spreads etc. The descriptions of the dishes are very clear so you know exactly what you're getting. Here's what we tried:
Fried Whiting with Scordalia: For those unfamiliar with Whiting, it's a white fish that's found in the Mediterranean Sea and the Atlantic Ocean. I was expecting a nice big fillet but what I got were four huge pieces--tails and bones still intact. More than what I'm used to, but once I got past the "authentic" presentation, I demolished it with gusto. The fish was simple yet flavored superbly--with hints of butter and lemon on the side. The actual fish was so light that eating four pieces didn't take very long. The side of scordalia (cold garlic mashed potato salad) was also tasty but a bit heavy on the stomach--I think they used too much garlic.
Gyro Platter: This was Dan's dish and he pretty much finished it all. The lamb was to his liking and wasn't greasy, as is the case sometimes with gyro meat. He also commented that the pita was toasted well and the tzatziki tasted homemade. The fries were exceptional and not soggy--which was the complaint about Pinocchio Palace.
Dessert: We were delighted to receive a complimentary dessert of semolina and cinnamon squares. They were light, sweet and bite sized--hitting the spot. The gesture was lovely and did not go unnoticed.
The Wine: This is one of the best deals on wine I've seen in Astoria. Taverna offers Greek house wine for $3 a glass and $4.50 for a small pitcher. I tried the house white and I liked it a lot and would definitely get it again.
Service and Cost:
Taverna has a hostess and a waitress and they're both the same person. She was friendly, quick and of course Greek--speaking the language fluently. She took our orders promptly and made sure we were happy with our meals. Because the restaurant was busy, she couldn't spend time at our table to give us that special touch but under the circumstances we understood.
I cannot believe how reasonable this place is! We paid a total of $26 for two large entrees, a beer and wine. Appetizers range from $4-$9, entrees from $8-$18 and side dishes from $2.50-$4. Make sure to bring cash though, Taverna does not accept credit cards.


A skilled bakerella is who I am. Don't mess with me when it comes to sugar, flour and chocolate."