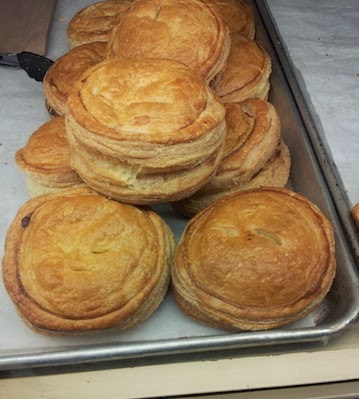 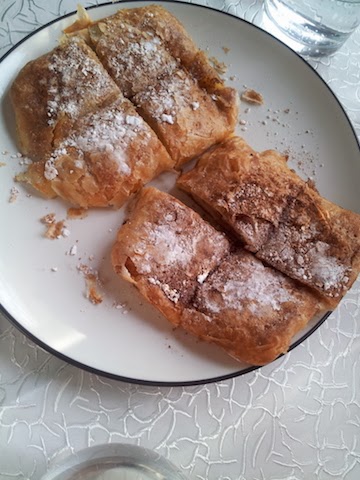 It’s been a while since I’ve set foot in Artopolis Bakery, as I’ve been trying to abstain from sweets and various types of baked goods.  Saturday however, was a different story, as I took the opportunity to indulge and bring some of their goodies over to my brother and sister-in-law’s lunch get together.

Naturally, I wanted to get Artopolis’ rosemary bread that goes well with hummus, olives and even just on its own.  But one can’t simply leave this place without picking up a few other provisions.

Cheese Pies – The bread counter at Artopolis not only serves a few varieties of rustic loaves, it also boasts a display of different cheese and spinach pies.  I chose two varieties of the former, one of which was savory, boasting a crumbly thick crust and a tender, savory middle.  Although I’m not 100% certain of the cheeses used in this particular pie, my guess would be something like feta.

The sweet cheese pie was everyone’s favorite, which resembled more of a danish, and it was further sprinkled with powdered sugar and cinnamon.  Heated up a bit, each bite was decadent, boasting a sweet/savory filling of anthotyro cheese.  Even the most discerning eaters found this pie delicious.

Spinach Pie – Who doesn’t love a classic spinach pie!?  This one was executed perfectly, with a pretty golden brown crust that was a little crunchy and crumbly too.  The bright green inside was earthy and vibrant, the spinach layers bejeweled with a few flecks of white feta.
Service and Cost:
Since the bakery was quite busy, it took me a while to get someone’s attention, but once I did, it was all good.  All in all, I was in and out in a matter of 10 minutes, which is more than acceptable on a busy Saturday.


Costs are expensive but worth every penny, setting me back $31 for two loaves of bread and 6 pastries.