A Virtual Group of Italian Chefs Dines at Testaccio 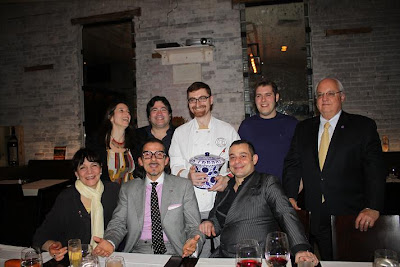 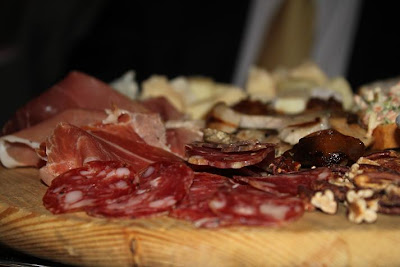 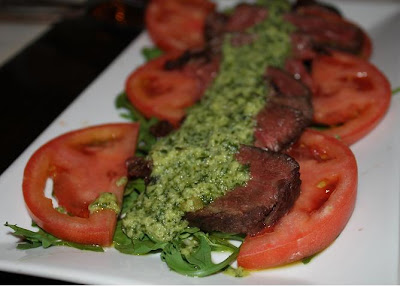 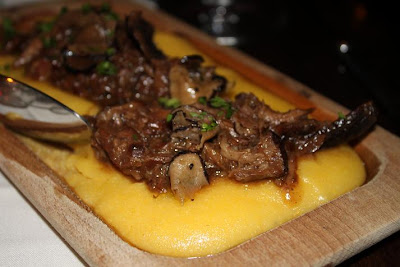 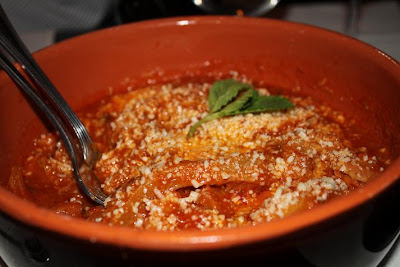 The title of this post may seem cryptic, as you might think to yourself, "what's a Virtual Group of Italian Chefs?"  I thought the same until I actually met the group (in reality) and had the pleasure of dining with them, courtesy of my friends at Fabbri. The dinner, held earlier this week at LIC's Testaccio was a great way for chefs from this organization to network, exchange ideas and interact with others in the culinary industry.  Given that Ivan Beacco, Testaccio's executive chef is a member of this organization enhanced the evening, inserting into it his own culinary point of view, showcased through his thoughtful and generous dinner.
Since the evening was all about making connections, I had the pleasure of meeting and making new friends.  From Fabbri's owner, Nicola, who runs the business in Italy to their charming Marketing Director, Donna to my friend and Fabbri North America owner, Bob, and the Italian chefs, the evening was filled with interesting people who made it truly memorable.

I've dined at Testaccio on several occasions, and while I've tried most of their signature dishes, some were still new to me, and I'd love to tell you about them.

1st Course - Consisting of a variety of antipasti and starter dishes, Testaccio did a great job of exciting our palates right from the beginning.  My favorites out of this medley included the pasta e fagioli soup, a thick almost chili-like broth with hearty cannellini beans and fresh maltagliati pasta, which had a nice firmness to it.  While the portion was too generous to finish, I kept dipping my spoon into this warm, comforting liquid of goodness.

Another stand-out, which was new to me here was the antipasto platter, which was presented on a beautifully rustic wooden board.  Decked with an impressive assortment of cured meats, cheeses, crostini and some sweet spreads (including honey), it was a fabulous dish for sharing and pairing.

2nd Course - I liked the pasta course, as it wasn't overly indulgent, presented on a compartmentalized plate with three sections.  Testaccio also uses these platters for their gnocchi, as I've seen this summer, and in this instance, I thought it worked well with pasta.

We received three pasta varieties including a classic spaghetti alla carbonara, seared polenta and rigatoni with braised short ribs.  Out of the three, I enjoyed the latter pasta the most, loving the tenderness of the meat with an almost stew-like consistency.  The pasta did a great job of holding the meat with its ridges and I could've had a full serving, even though I was already getting full.

3rd Course - The meat offering was also plentiful, with a platter of steak pieces, embellished with creamy pesto sauce, served on a bed of fresh tomatoes.  Despite tomatoes being out of season, these were pretty good and almost sweet - they added a nice freshness to the heavier steak and pesto.

The piece-de-resistance of the evening was Testaccio's tripe, which was served Roman-style, swimming in a slightly spicy tomato sauce and shaved pecorino on top.  I loved the texture of the tripe, which was braised to perfection.  My dining companion Donna remarked that it tasted deliciously authentic and reminded her of her Nonna's tripe, which in my opinion is the highest of compliments.

Other meat/fish dishes in this course included a rare tuna, wrapped in pork belly and also braised pork with cannellini beans.  Both were delicious and very different from what you'd expect to see at an Italian restaurant.  I was especially fascinated by the tuna because at times you couldn't tell if you were eating meat or fish - the combination of pork and tuna played tricks on your senses but not to the point of frustration.  It was more about intrigue.

Dessert - While I couldn't stay to enjoy dessert and nor did I have room for it, I managed to snag a simple vanilla sandwich cookie with Nutella in the middle.  Those of you who read this blog on a regular basis know that's one of my all-time dessert musts.

Thanks again Testaccio and Fabbri - I couldn't have walked out with a fuller belly and an even bigger smile.