Give a Warm Welcome to Astor Bake Shop 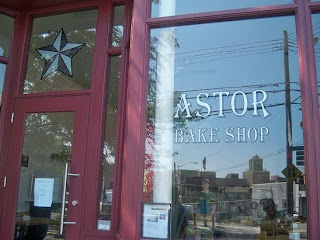 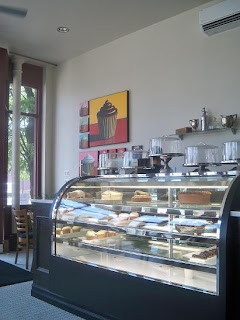 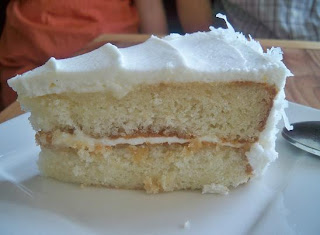 There's been a lot of talk in the nabe about Astor Bake Shop, a new bakery that opened up just last week, on Astoria Blvd, not far from Astoria Park.  Located in a residential neighborhood that lacks a nice bakery, I think it's a great addition to the community and people certainly seem to agree.  I visited the shop on its second day after opening and they not only had a lot of patrons but they already ran out of popular items such as cupcakes and tartes.  Definitely a good sign, I thought.

Atmosphere:
From its brick red exterior to its clean white interior, Astor Bake Shop doesn't lack aesthetic appeal.  It's simple, clean looking and contains a certain sophistication that comes with modern day bake shops - a definite step up from your basic bread and pastry bakery that often has no atmosphere.

I love that the space is extensive and offers a lot of seating for patrons to enjoy their sweets or just a coffee or tea.  It reminds me of an old school coffee house and because it opens very early (at 6:30 a.m.), I'm sure it will be used for just that, getting a quick cup of coffee before work.

There's a large display case in front, showcasing elegant yet simple cakes, tartes, cupcakes, eclairs and other goodies.  As I mentioned, the display case was a bit bare when I came in at 2:00 p.m. so I suggest you get there as early as possible to get the best variety.  But...since they do their baking on premises, items are constantly being replenished, which is great.

Sweets, Coffee, Tea, Etc.:
Although I really wanted to try the Valhrona Chocolate Praline Torte, they were out and I went for the coconut cake instead.  I loooove love love coconut anything so the decision was an easy one for me.  As you can see from the above picture, it was a handsome slice with plenty of rich frosting and coconut flakes on the outside.  I thought that the coconut flavor would be interweaved throughout the cake too, but no such luck. It turned out to be a simple white cake with vanilla frosting, embellished with coconut.  Slightly disappointing but still really tasty and moist.  We devoured it but would like to try something else next time - like their cupcakes or the almond cake. Meg tried the almond cake and had a really high opinion of it.  She said that it was flavored with orange zest, which made it zingy, overall elevating its flavor.

We also got iced tea and the dark and sweet iced coffee, which included condensed milk.  Yum! Both drinks received high marks and the quality was excellent - the coffee comes from a fair trade supplier called Stone Street Coffees.

In addition to the sweets, Astor Bake Shop will also serve burgers and sandwiches.  You can check out their full menu here.

Service and Cost:
We received nice, personable service.  Astor's owner and chef, George McKirdy was friendly and welcoming and gave us good insight about the items on the menu and what we can expect in the future.  He mentioned that the bake shop is still in its soft opening and will remain open later once they officially launch.
Costs are moderate and include the following: