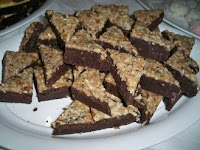 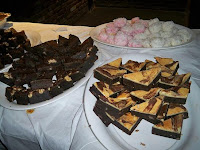 Last week I attended a fundraiser event for the LIC Community Boathouse. Held at the Foundry, a trendy space near the East River, it was a nice--albeit crowded--community event that brought many LIC and Astoria residents together.

I was disappointed to see that much of the food from Tuk Tuk and Manducatis Rustica was fast gone. However, I made sure to get my share of yummy desserts, courtesy of a wonderful catering company called Sage American Kitchen. Sampling their brownies, I especially loved the Germanchocolatecake variety, topped with gooey coconut-pecan frosting. The brownie itself was super rich with a prevailing dark chocolate flavor that was fantastic. In addition to the brownies, Dan and I tried their oatmeal raisin cookies, which were out-of-this-world soft and surprisingly light. Although I didn't get a hold of one, Dan praised the coconut mini-cake and so did Meg.

Sage is located on Jackson Avenue in LIC as a take-out shop as well as a catering company. They're especially popular for weddings, and have even fed the cast and crew of HBO's Sopranos and Sex and the City. Impressive...and they're right here in our neck of the woods.