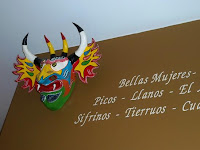 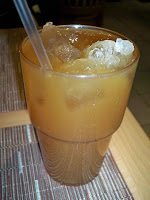 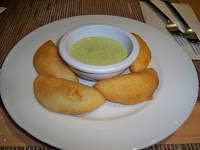 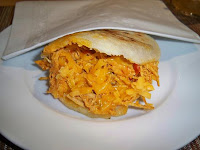 Arepas Cafe - 33-07 36th Avenue, Astoria NY 11106
718.937.3835
N/W Train to 36th Avenue
www.arepascafe.com
My visit to Arepas Cafe was spur-of-the-moment, and it happened right after I ran out of the Astoria Shopping Event, held at the Cup. The event sounded great in theory, but in reality it was too crowded and the merchandise wasn't all that. I dragged Dan out with me in the cold, so I made it up to him by taking him to Arepas, a delicious, low-key Venezuelan spot.

Atmosphere:
Arepas is as simple as can be yet it still evokes feelings of comfort and ease. The space is small, seating about 25 - 30 people and it's definitely more suitable for singles, couples or small groups rather than large parties.

The decor is standard, with blond wood tables and chairs that still manage to be comfortable. There's a counter up front from which you can order or you can get waited on by the sole waitress there. Arepas didn't get very crowded throughout our visit, so one waitress for three occupied tables wasn't such a bad ratio.

Something interesting--that also looked very Venezuelan--was a colorful tribal mask that hung right above the counter. The design and the colors were beautiful, embellishing the room and making it feel more authentic.

Food:
We knew what to expect from the menu, as we sometimes fix-up arepas at home--but our amateur attempts didn't come close to this goodness. We walked out of the restaurant happy and full but not grotesquely stuffed. Here's what we tried:

Mini Empanadas - Yum! These were so tasty mainly because of their crispy arepa crust. It was a very different kind of empanada from what I'm used to--more crunchy and less flaky. Each empanada had a unique stuffing, as there were four varieties - cheese, shredded beef, chicken and baby shark. Surprisingly enough, my favorite empanada was the baby shark--the meat was tender and seasoned perfectly. It had nice freshness to it, and there was no fishy aftertaste whatsoever. A close second favorite was the chicken and I was glad to see that they doubled up on this flavor.

Arepas - These were the real show-stoppers and the main reason why we came. I went for the chicken with melted cheddar cheese while Dan ordered the popular, Carne Mechada (Venezuelan shredded beef). Both were delicious and the meat in both was extremely tender and seasoned with a plethora of Latin spices. Once again, the actual arepa was my favorite part--crunchy, light and not greasy at all.

Jugo de Papelon con Limon (Brown sugar homemade lemonade) - This sounded too good to be true and I was skeptical until it arrived before me in all its glory. A tall glass of beautiful bronze liquid, it looked like apple cider. The taste was unlike anything I've tried--super sweet with a lovely tart finish--a cross between a cider and a lemonade, if you will. Although I'm not doing it justice with words, trust me on this one and just try it.
Service and Cost:
Our waitress was good. Although I'm not sure that she spoke great English, we communicated well and all of our dishes came out quickly. It was nice that she was within arm's reach, so we could ask her a question or request something whenever we wanted to.
Arepas Cafe won't put a dent in your wallet and I'd go as far as to call it an economy meal. Arepas are cheap and generally range between $5 - $6. For the meal that I just described, which included an appetizer, two arepas and two drinks, our total was $21. Don't miss this recession-friendly deal--I'll certainly be back. 3 Mmmms