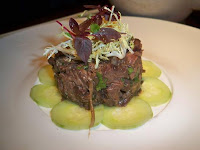 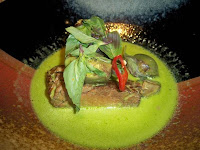 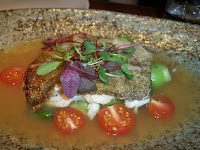 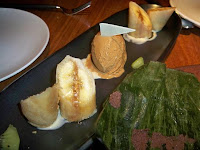 Kittichai - 60 Thompson Street, New York, NY 10014
212.219.2000
C/E Train to Spring Street
www.kittichairestaurant.com
I was happy to find out that Restaurant Week has been extended until Labor Day--must be the economy. But on the up-side, that gives us an extra month to indulge in great food from some of NYC's best restaurants. Kittichai, the chic Thai eatery in the trendy Thompson Hotel is one of those great finds. I was joined for a fantastic meal there by friends, Maya and Alexis.
Atmosphere:
Serene, sleek and modern are words I'd use to describe this place. Especially after a long, hard day in the big city, Kittichai has the charm and that je ne sais quoi to make you stop, relax and appreciate the beautiful surroundings.
The front of the house bar/waiting area provides a lovely welcome with cushiony seating, Buddhist sculptures and plenty of beautiful white and pink lotus flowers in individual vases--there's actually a whole wall of them. Alexis and I were trying to figure out if they were real--I think so.

The dining room is simply breathtaking with a warm color scheme of deep reds and oranges that stimulate the senses. We had the pleasure of sitting in one of the semi-private booths that line the perimeter of the room. Although I had to turn to see it, there's a spectacular water fountain that rests in the middle of the room with more lotus flowers and floating candles--really romantic and peaceful.
Food:
We ordered from the restaurant week prix-fixe menu, which had a nice selection of dishes--and the desserts especially caught my eye. Like we've done in the past, we each chose something different so we could share our meal and try a bit of everything. I highly recommend doing this with any restaurant week menu.
Wok-Fried Mussels - This was Maya's choice and it was a great one. The mussels were fresh and rested in a citrusy lemongrass broth. I've never had mussels in this type of sauce and am used to the garlicky, white wine sauces in French restaurants. This was certainly a nice change that was a lot lighter on the stomach. The only thing I missed was some sort of bread to soak up that delicious sauce. Who am I kidding though, I wasn't going to get this in a Thai establishment.
Northern Thai Beef Salad - Alexis ordered this and we were all surprised at how generous the portion was. It looked like a large beef cake with bean sprouts on top and refreshing cucumbers on the bottom. The beef itself was cooked well and seasoned with an assortment of Thai spices--I think there was a hint of lemongrass or even cilantro in it. We all liked it but thought that it had too much meat--we just couldn't finish it. I'd recommend this dish for a male diner or a serious meat eater.
Banana Blossom and Artichoke Salad - I was eager to try something different, thus selecting this appetizer. I was excited by its beautiful presentation but was really disappointed at its too-earthy taste. The combination of flavors was a bit much for me and there was an overwhelming bitterness from the artichokes and the banana leaves. I didn't care for it at all and the thick cashew sauce just killed it. I took a couple of bites but left more than three quarters of it on the plate. My dining companions weren't wild about it either.
Pan-Seared Cod - Maya and Alexis both ordered this and really liked it. I tried it too and definitely saw the value in it--the overall taste was light despite the use of tom yum broth, which could be spicy. The tomatoes that floated in the broth provided a welcome acidy touch and the skin of the cod was delicious and crunchy. I took advantage of the fact that my dining companions chose to avoid the skin. In fact, I always eat this part of the fish, as it contains wonderful nutrients and fantastic flavor.
Pineapple Braised Short Ribs - I couldn't be happier with my dish and despite feeling lukewarm about curry sauce, this one was perfect. It was sweet and a little spicy, embellished by Thai eggplant and sweet basil. The actual meat was extra tender and once dipped into the sauce, it had a lovely flavor--sweet from the pineapple and savory from the curry. My dining companions tried it too and absolutely loved it.
Dessert Sampling - We tried every dessert on the restaurant week menu and none of them disappointed us. I'd confidently say that this was the best part of the meal. Our choices consisted of flourless valrhona chocolate cake, banana spring rolls and a selection of ice cream/sorbet.
The cake was my favorite, partly because of the way that it was presented. Wrapped in a large green leaf (maybe a banana leaf but I'm not sure), it was unwrapped in front of us like a present. And once we bit into it, it was heaven on a fork--soft, fudgy and uncompromisingly decadent. The fresh cream that accompanied it was a nice touch and provided a smooth finish with the heavier cake. I'd get this again in a heartbeat--chocolate lovers, make note.
The banana spring rolls were an interesting choice as well--and they were new to us all. The inside of the roll was soft and warm and the outside was wrapped in a crispy pastry shell. The overall presentation was once again beautiful, as the bananas were cut into asymmetrical shapes and arranged on a long stone dish. Another inventive part of this was a side of burnt honey ice cream, providing a welcome chill for the tongue as well as a slightly bitter taste.
A selection of ice cream was also had and while this was the plainest dessert option, it was still delicious and a nice complement to the other two desserts. The flavors that we enjoyed were coffee, vanilla and chocolate. While I don't usually love coffee ice cream, this one was my favorite and tasted like really good, strong coffee--none of that sweet carameley stuff that you get in the supermarket.
Service and Cost:
The service was fine but I wouldn't call it spectacular. Our waitress had a tad of condescension to her. It's as if she was trying to say "you're just ordering from the restaurant week menu! ugh!" I don't know if Maya and Alexis agreed but she seemed disappointed and scornful of our choices instead of being welcoming and helpful. Our dishes arrived on time but we had to wait long for the check, which was also incorrect. Meh. I expected more.
The cost was straight up $35 each plus tax and tip. We didn't end up getting alcohol so our total was about $43 per person. This is great value for Kittichai where entrees could run up to $36 a pop.
2 Mmmms
Posted by Fooditka