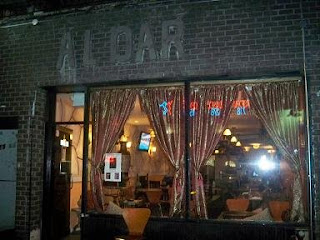 On our way to Laziza bakery last week, Meg and I spotted Al Dar, a Middle Eastern cafe/hookah place on Steinway that I've never noticed before. Its facade immediately caught my eye, as the sign was big but not tacky like some of its neighboring Little Arabia establishments. I peeked inside and liked what I saw--a casual atmosphere, a mix of traditional and cushiony seating as well as signs of live entertainment on the weekends. The sign out front announced a male entertainer by the name of Tarik Sultan who performs late on Saturday nights. I thought this was kind of cool and different from the usual curvaceous female belly dancers that you'll find in all the other Middle Eastern eateries/hookah bars.

In terms of the food, I have to find out more but it looks like your standard Middle Eastern fare--kebobs, tajines, and of course hookah. I'll follow-up with a menu shortly but in the meantime, I wanted to put this place on your radar. It certainly looks worthy of trying.
Al Dar Cafe and Restaurant - 25-94 Steinway Street, Astoria NY 11103
718.726.0604
N/W Train to 30th Avenue
Posted by Fooditka