A Burger Battle in Astoria 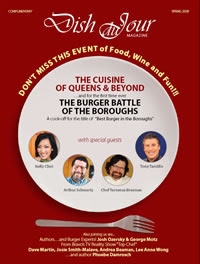 The first ever Burger Battle of the Boroughs is coming to Astoria. Seven top borough (and even Manhattan...shhhh) burger joints will duke it out on Tuesday, May 20th in Astoria World Manor for the coveted title of the Best Burger of the Boroughs. The event will attract major star quality, with celebrity judges such as:
Kelly Choi, Producer and Host of NYCTV's Eat Out NY
Arthur Schwartz, Author of Jewish Home Cooking
Josh Ozersky, Author of The Hamburger: A History and Co-Editor of NY Magazine's Food Blog, Grub Street
George Motz, Author of Hamburger America
Chef Terrance Brennan, Author of cookbook, Artisanal Cooking
Tony Tantillo, CBS2 HD Food Expert
Phoebe Damrosch, Author of Service Included: Front of the House Secrets Exposed
And....several stars of Bravo's series, Top Chef, including Dave Martin, Lee Anne Wong and Andrea Beaman.
You'll get to sample the best of the neighborhood's food and drink and root for your favorite burger stars. The competitors include:
Brgr of NYC
Resto of NYC
The Farm on Adderley of Brooklyn
67 Burger of Brooklyn
Harry's at Water Taxi Beach of Long Island City
Joe's Bestburger of Flushing
Coals of the Bronx
Who'll take the burger crown? Find out for yourself on May 20th at Astoria World Manor from 6-9p. Tickets are $55/person in advance. 718.777.7918
Posted by Fooditka