Sparrow - My First Disappointment...could it be? 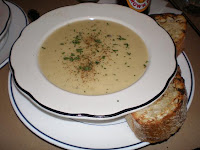 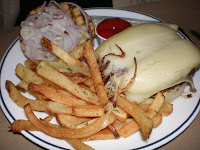 Sparrow - 24-01 29th St Astoria, NY 11102
718.606.2260
N/W Train to Astoria Blvd
www.queenssparrow.com
I'm in love with this neighborhood bar/cafe that always delivers--especially on the food. Sadly, I encountered a little hiccup last week when dining with Joey in Astoria companions Megc and Floozigrl. Here's what went down:
I ordered the special of the day--cream of onion soup. And because Sparrow's soups have been so spot on in the past, I didn't think twice before ordering it. Meg and Floozigrl too liked the sound of this, "oohing" and "aahing" in unison when the waitress announced it as a special. But despite the suspenseful lead-up, here's what arrived:
Cream of Onion Soup: Looking at the picture, this dish looks wonderful but its taste unfortunately did not match its appearance. The liquid was thick and flavorless--and it lacked salt which I thought was a quick fix. Nope, I was wrong--still bland and murky tasting even after adding salt. I'm sorry to report that the essence of onion was completely lost in this dish. My favorite part was the beautiful crusty bread that accompanied it.
Fortunately, my companions' meals were a success. They both ordered burgers--chef Reyes' specialty--and were fully satisfied. Meg's burger was topped with gruyere cheese while Flooz went for the brie. A side of herbed fries came with these lovelies--and before you could do a double take, they were so gone!
Despite the small glitch in the soup, of course I'll come back--but next time I'll stick with the items I know are a sure thing.
Posted by Fooditka