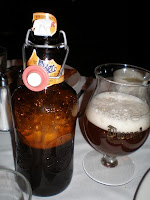 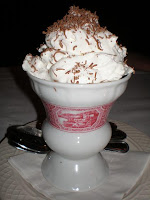 Silver Swan - 41 E. 20th Street, New York, NY 10003
212.254.3611
R/W or 6 Train to 23rd Street
Dan and I dined here on a fun double date with friends, Rikki and Greg. Swan was Rikki's suggestion and she discovered it the other week, being that its neighbor Mizu is one of her favorites. What caught Rikki's eye immediately was their extensive beer selection--it's a German restaurant after all. And being passionate beer freaks, we decided it was time to uncover this untapped spot.

Atmosphere:
Relaxing, cozy and warm are my words of choice for this place. I was in a hurry when coming here straight from work but my frenzy melted away when I stepped inside these friendly quarters. The colorful walls are cheery and the front of the house bar offers a nice welcome from the biting cold.
They sat us in the back where the atmosphere was even more chill. Cookbooks from all walks of life line the walls and are positioned conveniently at eye level. They're perfectly accessible to patrons and so inviting in fact that we picked up a couple and leafed through them. Overall, Swan does a great job of making you feel at home--we all lounged around as if we were sitting in our home kitchen.
Food:
The style of cuisine is of course German-American but aside from typical German dishes, they also have European staples such as Hungarian Goulash. The four of us all ordered different entrees and couldn't wait to swap forkfulls to experience a bit of everything.
We started out with two appetizers for the table--red beet salad and crispy potato pancakes. The guys immediately lunged for the pancakes while we women were content with our pickled beets, paired with pickled onions--a flavorful and healthy option. But of course we couldn't resist the potato pancakes, which were crunchy on the outside and gooey on the inside. They were even better when enhanced by fresh sour cream and apple sauce--reminding me of my beloved Hanukkah snack.
Entrees were also spot on and it has to be said that the portions are very generous. I ordered the Hungarian Goulash and I'd highly recommend this to anyone who likes slow-cooked beef. The meat was incredibly tender and the surrounding sauce was wonderfully potent and great for dipping bread. My sides included sweet red cabbage and dumplings which resemble the texture of gnocchi. They're actually called "nokedli" in Hungarian--what my grandmother calls them--or spatzle in German. But any way you put it, they're delicious and soak up the beef sauce perfectly.
The other big hit of the night was Dan's German Meatloaf--juicy and flavored by beef sauce and sides of mashed potatoes, creamed spinach and mushrooms. Rikki and Greg loved their dishes as well. Rikki got the Bratwurst and the coolest part of this were the tubes of different mustards for dipping. Greg was happy too because his Pot Roast came with a side of the beloved potato pancakes that were devoured in the beginning of our meal.
I'm not even sure how we managed to make room for dessert but we shared a Black Forrest Sunday. Also very delicious, it was topped with fresh whipped cream and decadent chocolate shavings. The only complaint was that you had to dig to the very bottom of the cup to get to the cherries and strawberries.
Last but not least, I cannot even begin to give the beer selection justice--it was that extensive. The beers come from all over Europe, including Germany, Holland, England, the Czech Republic and much more. I tried a British cider which was lovely, sweet and not too heavy.
Service and Cost:
The service here was just OK and my dining companions would agree. It took a while to take our orders and though our waiter was nice, he lacked personality. One strange thing was that although the Silver Swan is European, its waistaff lacks any trace of European heritage. And while our dishes arrived in good time, it took unnecessarily long to get our check and settle up.
The prices here are moderate for Manhattan--appetizers range from $5-$9.95 and entrees from $14.95-$24.95. They do offer a dinner special called the Complete Dinner which gets you an appetizer and an entree for $35--not bad. The beers are reasonable and you could get a large glass (14 oz) for just $8.