Igloo Cafe - From Ice-Cream and Beyond 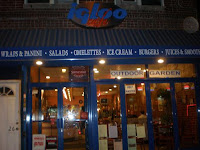 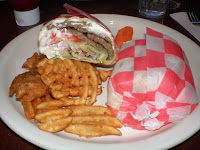 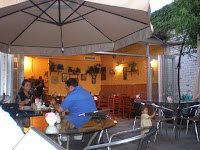 Igloo Cafe - 22-26 31st Street, Astoria, NY 11105
718.726.7700
N/W Train to Ditmars Blvd (last stop)
www.igloocafe.com
I've heard good things about Igloo a while back and finally made it over there this week. It's a casual place that's known for ice-cream and frozen yogurt as well as sandwiches and all-day breakfast dishes. They also boast an intimate outdoor garden, which Dan and I were eager to check out.
Atmosphere:
The vibe is informal and relaxed. The front of the house looks like a typical cafe--colorful and cheery with exposed brick walls and a whimsical igloo motif. There's also a robust counter in front, displaying various ice-cream and sandwich and salad fixins.
The back of this cafe is charming and special, with an intimate outdoor garden. While seating is limited--for about 15-20 people--it's a quiet area, which is covered by oversized umbrellas and greenery. You almost can't believe that you're just feet away from one of Astoria's busiest streets.
Food:
Dan and I weren't particularly ravenous so we decided to go for a light sandwich. We both ordered Gyro wraps, which we liked a lot.
Beef Gyro Wrap - This was my order and it certainly satisfied my craving. The best part was the toasted tortilla--it was crunchy and had a bit of a char taste from the grill. The gyro meat was juicy and not too greasy--you can tell that this place uses healthful ingredients. While it did come with a side of waffle fries (not healthy!) there weren't too many of them, which was a blessing in disguise. The portion of this sandwich was perfect, especially considering its inexpensive price.
Chicken Gyro Wrap - Dan opted for the chicken variation of the gyro and was also happy with it. It looked like a replica of mine, except for the meat. Dan's only complaint was that it didn't taste too much like a gyro but more like a grilled chicken sandwich. Oh well!
Igloo is also known for its ice-cream variety and Tasti D-Lite frozen yogurt.
Service and Cost:
All was good in this department--our waiter was unobtrusive yet efficient. The place wasn't too busy on a Wednesday night so he had plenty of time to devote to us. I would definitely recommend sitting outdoors if the weather is cooperating--it feels a lot more special.
For the quality of food that you get here, Igloo is inexpensive. Our gyro wraps were less than $7 each and omelets also range in this neighborhood. If you're looking for something casual, comfortable and good, I'd suggest it. But don't expect anything fancy.
2 Mmmms
Posted by Fooditka